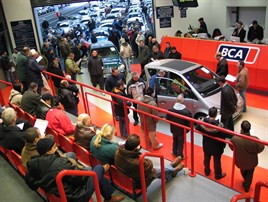 As predicted, the combination of supply issues and seasonal demand in September saw values climb for the second month, according to BCA’s latest Pulse report.

On average, values increased by £364 (6.2%) to £6,252, the first time the £6K benchmark has been surpassed since 2009. Unsurprisingly values rose in all three key sectors of fleet/lease, dealer part-exchange and nearly new. Average values also rose strongly in August, and in two months values have climbed by nearly 11%.

Fleet values continued to improve for the second month running, having fallen for six consecutive months from February onwards. Month-on-month values improved by £335 to £7,557 in September, while CAP performance improved by two points to 99.3%. Year-on-year values are adrift by £54 or 1.9%.

The figures come against a backdrop on a new car market that is continuing to slow, with September falling 0.8% to 332,476 units – one of the lowest volumes recorded since twice yearly registrations were established in 1999. According to the SMMT, private demand slipped further over the month, down 9.3% representing 46.7% of the September total, down from 51.0% in 2010.

BCA’s communications director Tony Gannon said: “Although September 2011 has seen the first big value rise recorded this year, much of this is due to supply issues as buyers compete for the best quality stock.

“September is typically one of the best performing months in the annual cycle, but this is the first time we have really seen that trend re-emerge since the recession started in 2008.

“The past month saw a good level of interest from professional buyers, but as entries increased by around 13% over the month, conversion rates faltered, dropping by around nine points. Sold volumes increased by around 5%, with much of that increase coming from the part-exchange sector. This increase in entries means that professional buyers finally have access to a wider range of stock, following the relative product drought experienced during much of 2011.”

Gannon added “While September has brought more good news for vendors, history and the longer term prospects suggest that we will see more pressure on average values and conversion rates between now and the end of the year.

“There is very little to suggest that hard-pressed household budgets are going to improve in the months ahead, which means less disposable income available to change or upgrade the family car.

“While there will always be activity in the used car market caused by changes in lifestyle – the growing family, a young driver passing the driving test, a windfall purchase - the continuing pressure on consumer funds must impact the retail sector, which in turn will affect wholesale demand.”

Fleet values continued to improve for the second month running, having fallen for six consecutive months from February onwards. Month-on-month values improved by £335 to £7,557 in September, while CAP performance improved by two points to 99.3%. Year-on-year values are adrift by £54 or 1.9%.