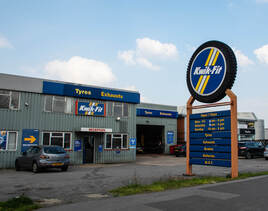 Millions of pounds are being invested in Kwik-Fit by new owners Itochu Corporation of Japan whose priority focus on improving the customer experience has resulted in a major refurbishment plan for its UK centre network.

Only three months after Itochu acquired the Kwik-Fit Group for £637 million the company has already embarked upon the roll out of a pilot centre refurbishment programme.

The first four new-look centres in Glasgow, Stafford, Uxbridge and Newbury are expected to be operational by the end of November with 60 Kwik-Fit centres scheduled to be given a major makeover by the end of the first quarter 2012.

Kwik-Fit operates a total of 673 high street centres nationwide - along with 200 mobile tyre fitting vehicles - and the plan is to give the entire network a whole new look within the next six years..

Itochu has already confirmed its intention to give fleet customers access to the 130 Stapleton’s Tyre Services centres in the UK that it already owns.

Kwik-Fit Fleet sales director Peter Lambert said: “Itochu is already stamping its mark on Kwik-Fit with its investment plans. The company’s two previous owners have been private equity firms which have both had a completely different approach to the business compared with the new owners.

“We are already benefiting from an IT upgrade in the fleet division with the sales team being given new laptops and office staff now have new PCs. Our customers will shortly benefit from the investment that is to be made in the centres and additional operations managers who will focus on frontline service delivery.

“As a result, we believe that the customer experience for company car drivers will further improve and service quality will be boosted.”

A further change will see Kwik-Fit taking a new approach to selling exhausts, sales of which have been declining nationally for years. In recent years sales of new car and van exhausts having been dropping at an annual rate of around 15% due to improvements in reliability and quality of the original equipment. In fact, most exhausts today are replaced due to damage caused by sleeping policemen or in crashes.

Lambert said: “Kwik-Fit centres will continue to sell exhausts but instead of having them lined up on centre shelves our local suppliers will be able to deliver a replacement to meet a customer’s requirements within 45 minutes.

“With fewer exhausts in stock at centres we will be able to stock a greater range of tyres which will further improve our ability to supply the tyres customers require from stock.”