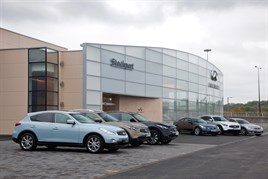 Products tuned to the fleet market

All of Infiniti’s products will be “highly tuned” to the fleet market from now on, according to Lewis.
He says that performance will come with “very attractive, competitive levels of CO2 emissions” thanks to sharing engine technology with Mercedes-Benz.

“The product and the engine derivatives that we’ve got coming in are very significant for the fleet market,” Lewis says.

“We’ve got a four-cylinder diesel going into the M, we then launch a full range of four-cylinder petrol and diesel engines, we launch a revised G, we launch our new C segment high entry car and an electric vehicle.”

Infiniti’s electric vehicle, which should come to market in 2014, will be a four-door luxury saloon, using technology from the Nissan Leaf but “tuned to suit the Infiniti customer”.

“It will sit quite nicely against the hybrid that we’ve already got,” Lewis adds. “We’re building credibility in that market.”

The M hybrid has only just arrived in the UK as it was a victim of the earthquake in Japan and the launch was delayed by about three months.

Lewis is predicting Infiniti will sell 80 to 100 M hybrids to fleets.

“We never really overly push something,” he says. “If I said that we wanted to do 600 to 700 cars in total this year people would say that we could probably do that with the M hybrids but that would be overkill.”

Lewis believes that constraining fleet volume will mean that cars have good residual values, making them attractive to leasing companies.

“We offer leasing companies less risk; it’s low volume,” he says. “We’re not going into stressful sectors of the market.

“Leasing companies are beginning to understand what we stand for, what we can deliver for them and their customers through our unique hospitality and the customer experience that we offer, and the exclusivity of our cars.”