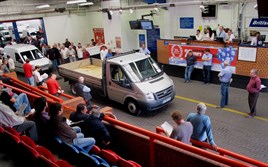 Data contained in the 2011 Used Car Market Report published by BCA and written by Professor Peter Cooke, University of Buckingham, show that the used LCV market is facing a potential ‘black hole’ in supply in the years ahead.

With annual LCV registrations falling sharply from the record 338,000 units sold in 2007, Cooke estimates around 275,000 LCV’s will effectively be ‘missing’ from the used vehicle supply line between 2011 and 2015, a reflection of the reduced new van volumes registered from 2009 onwards.

In addition, many professional volume LCV operators have kept vehicles in service longer, meaning vans are coming to market both older and at a higher mileage.

Cooke suggests this could have a direct effect on small businesses, partnerships and sole traders, who are the biggest buyers of used LCVs as well as the wholesale and retail van trade who could find it increasingly difficult to source good quality used LCV stock.

He said: “In simple terms, if we assume the national demand for used LCVs will be in the region of 300,000 annually, as the economy improves, there will be a shortfall of some 275,000 first-time used LCVs entering the market between late 2011 and 2015.”

The report also suggests the average age of LCVs on UK roads will rise as fewer new vans have been sold to ‘freshen the mix’, and the van parc will remain static around 3.5 million units for the next few years.

Cooke suggests there are a number of issues for market watchers to consider. He said: “Retailers need to examine their used LCV sources and the volumes that are available going forward - potentially they may need to develop new sources of used LCVs in the short/medium term to protect supply. If dealers are unable to source the type of units they have traditionally handled, it may be necessary to work with older vehicles.”

He concluded: “As SMEs’ demand for used LCVs rises, the growing shortage of younger used LCVs will become more apparent, with the likelihood that demand will exceed supply considerably.”