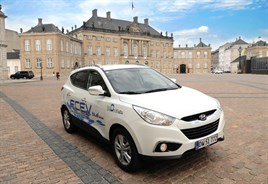 The Hyundai ix35 fuel cell electric vehicle (FCEV) has been selected by the European Commission-backed Fuel Cells and Hydrogen Joint Undertaking (FCH JU) to be used as a demonstration vehicle to test and promote hydrogen fuel cell technology in a real-world environment.

As part of the announcement made today at the FCH JU-organised Joint Technology Initiatives: Innovation in Action exhibition in Brussels, the ix35 FCEV will be made available for Members of European Parliament, Commissioners, EU officials and other policymakers to test drive until March 2012.

The decision moves Hyundai a step closer to the commercialisation of hydrogen fuel cell electric vehicles by 2015. Debuted at the Geneva Motor Show in 2010, the ix35 features important innovations over previous-generation Hyundai FCEVs, including a 55% improvement in driving range and an 80% reduction in manufacturing costs.

Hyundai has become a world leader in the development of hydrogen fuel cell technology since the introduction of the Santa Fe FCEV in 2000, operating a dedicated fuel cell research division at its Eco Technology Research Institute in Korea.

Earlier this year, Hyundai signed a memorandum of understanding with the municipality of Copenhagen to establish the necessary infrastructure for the supply and use of FCEVs in Denmark.

Maria da Graça Carvalho MEP, Member of the Industry Committee and host of the exhibition Joint Technology Initiatives, said: “Fuel cell vehicles, such as the ix35 FCEV, have great potential to help fight carbon dioxide emissions, reduce our dependence on hydrocarbons and contribute to economic growth. I am sure my fellow members of the European Parliament will embrace the opportunity to test the viability of hydrogen technology.”

The ix35 FCEV is based on the award-winning compact SUV, ix35.