London's taxis to be powered by network of hydrogen refuelling stations 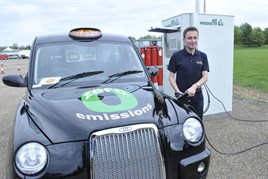 The HyTEC project (Hydrogen Transport for European Cities), which is part funded by the Fuel Cells & Hydrogen Joint Undertaking (FCH JU), will also see the installation of an Air Products hydrogen fuelling station in London.

This new station will connect up with the two fuelling stations already in operation in the city supporting London's hydrogen bus fleet, creating a vital infrastructure network powering hydrogen fuel cell vehicles across the capital, some in time for the 2012 London Olympic Games.

Commuters already travel on hydrogen buses around the city and the introduction of additional hydrogen-powered taxis and scooters mean Londoners will experience the benefits of hydrogen as a transport fuel: the same range, speed and fuelling time as conventional fuels with the added benefit of no emissions at the point of use.

The vehicles and refuelling site form part of the Mayor's vision to promote innovative zero and low emission technologies in the capital to clean London's air and tackle pollution. London already boasts the UK's only zero-emission bus route running with a fleet of hydrogen single decker buses.

The Mayor of London, Boris Johnson, who has given his full support to the bid, said: “I want London to become a zero-emission city in order to deliver cleaner air and improve quality of life.

“It is important that London champions innovative new technologies to get us to this point, which is why I am delighted we are set to get even more hydrogen vehicles on our streets in time for the Olympic and Paralympic Games and beyond.

“This supports my drive to promote the uptake of cleaner vehicles such as electric cars and the new fleet of hydrogen buses running in London, which is setting industry standards.”

This industry-led project utilises the hydrogen transport experience and knowledge of 16 companies at the forefront of development of hydrogen technology and infrastructure.

In an effort to understand the best methods for rolling out hydrogen transport in European cities, this international initiative will also install a network of fuelling stations will also be deployed in Copenhagen, Denmark.