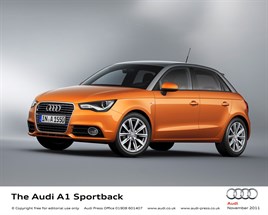 The new five-door, five-seat A1 Sportback will become available in the UK later this month and will reach its first customers here in the spring of 2012.

Although its compact, city-friendly dimensions very closely follow those of the three-door A1, the A1 Sportback is actually six millimetres taller and six millimetres wider, and inside offers slightly more head room and shoulder room as a result. It also makes provision for an extra passenger - up to three can pass through its rear doors and take a seat, each of them protected by a headrest and full three-point seatbelt.

The L-shaped, retractable head restraints do not have to be removed to do this. The loading lip is a comfortably low 66 centimetres, and stowage can be further simplified by an optional luggage package featuring usefully divided storage compartments under the loading floor and other amenities.

Examples of the additional high-end complementary features available include a digital audio tuner and the 465-watt Bose surround sound system with 14 speakers. The front woofers are illuminated with LEDs. Bluetooth and wired interfaces are available for mobile phones and external players.

Another feature not normally associated with cars in this segment is the Bluetooth online car phone that brings ‘Audi connect' online services to the A1 Sportback. These include navigation with images from Google Earth, specially prepared news, weather and travel information, web radio and voice-controlled POI search. At a later date it will also incorporate Google Street View images. A WLAN hotspot connects mobile devices on board to the internet.

There are also Xenon plus headlights with LED daytime running lights and LED tail lights, a high-beam assistant, light and rain sensors, the advanced key, two different parking system versions and cruise control, to name a few. The list of more indulgent extras extends to everything from electronic climate control, heated front seats and special colours for the air vent sleeves to fine leather upholstery.

The A1 Sportback range will initially feature a choice of three TFSI petrol engines and one TDI diesel producing between 86PS and 185PS. All bar the 185PS unit will have their impressive efficiency further enhanced by an engine start-stop system.

In line with the three-door A1 range, the 1.6-litre TDI model will again be the efficiency standard-bearer for the Sportback, combining its 105PS output with the potential for 74.3mpg and a congestion charge and VED-eliminating 99g/km.