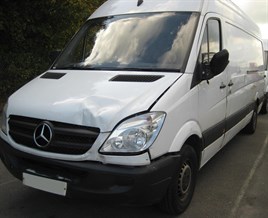 The real cost of damage when LCV's are sold is rising according to new data released by British Car Auctions (BCA).

Figures outlining the total average cost of damage on LCVs inspected by BCA has risen by 18% year-on-year, from £683 to £808 on average, with some examples of damage breaking the £2,000 barrier. This is in spite of the fact that average age has remained static at 54 months, and average mileage has only risen from 71K to 73K over the same period.

Duncan Ward BCA's general manager, Commercial Vehicles, said: "This is a worrying trend that cannot be blamed wholly on contract extensions. Far too many vehicles are entering the remarketing chain with increasingly high levels of damage which reduces their desirability and value to used buyers - even when supply is restricted.

“We are seeing a widening two-tier market, where the scarce good condition vans are becoming even more sought after, while damaged, poorly presented vehicles run the risk of being overlooked completely.

"More often than not, we see vans being sold where damage obviously occurred some time ago and has not been addressed by the vehicle owner or operator. It has deteriorated over time, rust has set in and economical SMART repair techniques cannot be used.

“A small area of damage that might potentially cost tens of pounds to put right when it first occurred becomes a major repair costing hundreds of pounds some months later. This requires a cultural change in the way vans are managed - repairing or even stopping the first dent might mean that a second, third or fourth dent does not occur. If a driver gets in van and it barely has a straight panel on it, it is inevitable that less care will be taken of that vehicle."

He added "Similarly, drivers should be aware that it is their responsibility to report damage when it occurs. Drivers should also be encouraged to keep the cab space in good order, because replacing interior trim, seats and headlining fabric is prohibitively expensive - again accidents will happen, but there is no excuse for negligence.

"The value of a mid-term inspection as a management control cannot be over-emphasised. If a van is inspected two or three times during a typical four year working life it will identify damage that could be rectified immediately, rather than waiting for this to be picked up at defleet time, when the cost to repair may have risen many times over.

"While LCV's are often the Cinderella of the company fleet, a proactive and positive attitude to commercial vehicles will bring its own rewards. Van drivers should be managed with the same mindset as company car drivers. If a company car gets damaged, it gets repaired. The same stance should be taken with company vans."

Ward concluded: "It is time to ditch the attitude of ‘it's only a van'. Vehicles are regularly being offered for sale in a condition that literally wipes hundreds of pounds off their potential value. In the current economic climate, surely every business should be paying close attention to costs that can be controlled and managed?

"Investing in driver training and mid-life inspections could save the operator or asset owners many thousands of pounds. While everyone accepts a van is a working tool, we see examples of basic negligence every day that have a real financial impact for vehicle owners."