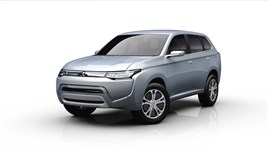 Mitsubishi will be showing a total of 15 vehicles at the 42nd Tokyo Motor Show, held at the Tokyo Big Sight convention centre in Tokyo from November 30 through December 11. Two cars will make their world premiere at the show: the Mitsubishi Mirage and the Mitsubishi Concept PX-MiEV II. They respectively embody two major pillars to the company’s product strategy outlined in the ‘Jump 2013’ mid-term business plan: global strategic models focused on emerging markets and models featuring “green technology.”

Also at the Mitsubishi Motors stand will be the Minicab-MiEV light commercial electric vehicle due to be released in the Japanese market in December this year and the i-MiEV new-generation electric vehicle (EV) which is currently on sale in countries all over the world including European countries, and is to be rolled out in the United States by the end of this year. Alongside these will be the RVR compact SUV (ASX in the UK market) powered by a new MIVEC engine that incorporates MMC’s Auto Stop & Go (AS&G) idle-stop technology, and the Pajero (Shogun the UK market) SUV powered by a “clean diesel” engine.

The Mitsubishi Motors stand will also feature the MiEV House, a concept of a “smart house” that tackles energy and global warming by managing energy usage between the home itself, “smart appliances,” EVs/plug-in hybrid vehicles (PHEV), and “smart grids” all at the same time through HEMS (Home Energy Management System) and MMC’s own EIS (Electric Vehicle Integration System). HEMS makes life more comfortable for people living in homes installed with it by continually monitoring power available to power being used and optimising both so that effects of energy shortages and energy costs can be reduced. Connected to a “smart home” with HEMS, EIS constantly monitors EV/PHEV battery usage and efficiency (which varies on how the EV/PHEV is driven), feeds this information to HEMS, which then optimises charging from the house so that the EV/PHEV always has enough energy in it.