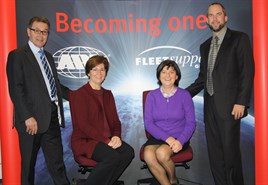 UK-based Fleet Support Group (FSG), one of the UK’s largest fleet management companies, has been acquired by the American-based Automotive Resources International (ARI).

The deal, exclusively revealed in this week’s Fleet News, will give ARI its first business in Europe. The company has operations in North America, Canada, Mexico, South Africa and Australia, with alliances in India and China. It has around 1.8 million vehicles globally under fleet management; FSG will add a further 55,000.

FSG chairman and founder Geoffrey Bray will remain at the helm of the UK business “for at least five years”, he told Fleet News.

In addition, there will be no change in FSG’s management structure or staff positions as a result of the acquisition, for an undisclosed sum. FSG’s Chippenham head office in Wiltshire will become ARI’s European head office.

“We have had offers in the past but we’ve not been interested,” says Bray. “What’s different this time is the synergies: both FSG and ARI are privately-owned family businesses and have a similar ethos of partnering with customers and driving efficiency through pro-active management and a zero-tolerance approach to unauthorised expenditures.”

FSG’s award-winning RiskMaster programme will be adopted as ARI’s global offering to fleets with the company investing further in the software at its 180-employee IT centre. Bray describes it as having “20 times the resource to deliver the services we do now”.

He adds: “ARI say they are five years behind in the USA – they see us as the leader. RiskMaster will be their worldwide brand and it will be run from the UK. All FSG staff and management still stay in their current positions.”

According to ARI President Carl Ortell: “This significant acquisition is another vital step as we continue to expand the scope of our services and our geographical reach. Everyone at ARI is extremely excited about FSG joining our family of companies and about the opportunities that lie ahead of us in the European market.”

Lord MacLaurin, who will continue as a non-executive director of FSG and is former CEO and Chairman of supermarket giant Tesco, and former Chairman of Vodafone, added: “The association of FSG and ARI is very exciting for both parties. ARI will have a toehold in the UK which will provide a stepping off point for Europe, while FSG will be able to leverage its prestigious customer portfolio on to the international stage.”

Bray believes ARI’s financial resources will open up growth opportunities across Europe. He points to the forthcoming changes to the lease accounting rules which will mean leased vehicles being put on the balance as one of those opportunities.

Although a date has yet to be set for the new rules, Bray claims companies will increasingly look to fleet management as they seek to unbundle funding from maintenance.

“The opportunities for pure fleet management in Europe will increase, especially from full maintenance contract hire in the UK,” he says.

“This is a UK quirk. Most other places are finance lease with the end user taking the risk and handling the fleet management.”

ARI provides finance lease funding in America with the lessee taking the residual value risk: it forecasts that this funding model will become more popular as vehicles move into the balance sheet.

“This will be the growth area. It gives transparency – not bundling services,” says Bray.