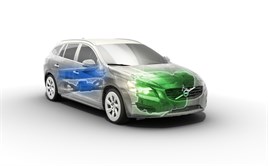 At the 2011 Geneva Motor Show, Volvo Cars will be unveiling the world's first diesel plug-in hybrid - a virtually production-ready Volvo V60 with carbon dioxide emissions below 50 g/km. The Plug-in Hybrid, which will be launched in the market in 2012, is the result of close co-operation between Volvo Cars and Swedish energy supplier Vattenfall.

The concept of a plug-in diesel hybrid gives the driver the very best of what an electric and diesel car can offer: very low fuel consumption and CO2 levels, combined with long range and high performance.

By simply pressing a button, the car gives the driver the option of how they want to drive:

The front wheels of the V60 Plug-in Hybrid will be driven by a five-cylinder 2.4-litre D5 turbo diesel, which produces 215 horsepower and maximum torque of 440 Nm.

The rear axle features ERAD (Electric Rear Axle Drive) in the form of an electric motor producing 70 horsepower, which receives its power from a 12 kWh lithium-ion battery pack. The car features a six-speed automatic transmission.

The driver chooses the preferred driving mode via three buttons on the instrument panel: Pure, Hybrid and Power. The interaction between diesel and electric power is handled via a control system.

"The second-generation hybrid is the perfect choice for the uncompromising buyer who wants a superbly carbon dioxide-lean car packed with driving pleasure. To get drivers to think green, we have offered both, in one traditional genuine sports wagon" says Stefan Jacoby, president and ceo of Volvo Cars. He adds: "The technology is still undergoing development and testing, however, the car already points very clearly to what our customers can expect when the plug-in hybrid enters showrooms next year. What we've done is to spice it up with spearhead technology that allows the driver to choose: zero emissions, high-efficiency hybrid or full-on performance. Just select the mode that suits best."