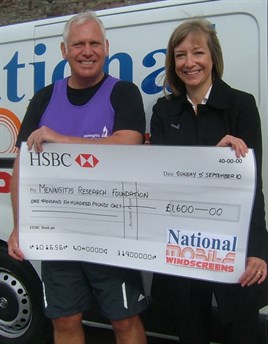 Martyn Bennett, sales and marketing director at National Mobile Windscreens, has signed up for the Bristol 10K run on May 15 to launch the company’s latest campaign to raise funds for its chosen charity Meningitis Research Foundation.

Bennett is hoping to add to the £1,650 which he raised last year from taking part in the Bristol half-marathon which he completed in 2 hours 27 minutes.

Bristol-based National Mobile Windscreens adopted the Meningitis Research Foundation as its chosen charity 19 years ago to celebrate their 21st anniversary and have since raised more than £13,000 for the campaign.

This year they are celebrating their 40th anniversary and are making a special effort to boost fund-raising to help raise greater awareness of the symptoms of Meningitis which kills more than 300 children and people in the UK every year.

Bennett said: “It is a great challenge for me personally and a privilege to raise money for such a worthwhile charity.

“People need to know that a donation of just £1 buys 100 symptoms cards, £10 buys one hour of in depth support, £25 one hour of a typical research project, £100 pays for twenty information packs for GP surgeries and health professionals, and £250 provides funding for the 24 hour helpline for half a day,” he said.