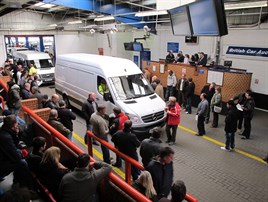 According to BCA’s latest Pulse report, average values rose in January across the board, with all sectors posting notable price improvements over December - which had been heavily disrupted by the Arctic conditions and shorter trading period. Sold volumes rose by nearly 50% across the board.

The average value of an LCV sold at BCA in January rose by £155, equivalent to a 3.8% increase over December and the highest average value recorded since June 2010. Performance against CAP climbed three points to 99.46%.

Fleet & lease LCV values increased sharply by £320 (7.1%) to £4,785, following two relatively poorly performing months in November and December. While year-on-year values are behind by over £200, this should be seen in the context of a market that was reaching its peak a year ago. Fleet vans averaged 99.01% of CAP in January, a rise of nearly three points over the December figure.

There was also significant value growth in the part-exchange sector, which climbed for the first time since October, reaching £2,452 - an increase of £123 or 5.2% in the month. CAP comparisons reached 100.8%, a rise of over four points, while year-on-year values were behind by £135 or 5.2%.

Nearly-new volumes actually fell in January, underlining how scarce stock is in this age sector. Values improved by nearly £600 to £10,404 from £9,809 in December, with model mix – as usual – playing a significant role in the value growth. Performance against CAP improved again, reaching 103.4% - a five point increase over December.

Duncan Ward BCA’s general manager – commercial vehicles commented, “Demand improved significantly in January following a tough end to the year, although there are still some issues relating to poor stock mix affecting the market. After the general shortage of LCVs seen throughout 2010, the market has seen a large influx of vans from business failures and liquidations, many in poor condition or with a low specification.”

He confirmed “We usually see an upturn in interest and demand in the first three months in any year, but concerns remain that the increase in volume will have a dampening effect on the overall market. Conversions and prices have improved, but perhaps not to the level they might have done.”

“Buyers have remained consistently upbeat and willing to bid on almost everything, while only pushing the barriers on the exceptionally clean, rare or low mileage vehicles.”

Ward concluded “As predicted the VAT increase has had little or no effect on the B2B marketplace. However, LCVs offered without VAT are clearly even more attractive to private buyers and trade buyers hoping to retail to a non-vat registered customer.”