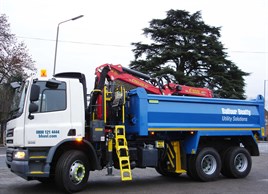 Balfour Beatty Utility Solutions has begun its 2011 fleet replacement programme with the purchase of a second wave of Mercedes Sprinter vans.

The company switched to the Mercedes van at the beginning of 2010 because of its superior safety standards compared to other models. Last year, the business bought around 400 Sprinters, whilst 2011 has seen that number rise to nearly 700 with the purchase of a further 274 vans.

The Sprinter already boasts impressive safety features, including adaptive brakes and brake lighting, multiple crumple zones and driver and passenger airbags. Balfour Beatty Utility Solutions has taken safety further with this year’s batch of vehicles by specifying a number of additional features. These include parking sensors, daytime running lights and edge protection. The company has also taken delivery of a number of “ECO Start” models on a trial basis as part of its continued efforts to reduce the fleet’s carbon footprint.

The purchase of the Mercedes vans is part of the wider 2011 fleet replacement programme. This is seeing the company purchase over 600 new vehicles, including everything from the smaller Astravan and Toyota 4x4s to 7.5t Daf Tipper trucks and 18t MAN crane lorries. This year’s purchases mean that in the 12 month period up to June 2011, the company will have received around 1100 new commercial vehicles, making around three-quarters of the Balfour Beatty Utility Solutions fleet less than 15 months old.

“With our 2011 fleet replacement programme well underway, we are ensuring the business continues to have a safe, fuel efficient fleet to help meet all workload requirements. However, we believe our responsibility does not end once the new vehicles have been delivered. It is essential that our employees are educated in vehicle safety and safe loading practices. The fleet team here at Balfour Beatty Utility Solutions works actively to provide this training, including the regular deployment of new portable dynamic weighbridges.”

“The initial decision to order Mercedes Sprinter vans last year was a momentous point in our ZERO HARM journey, and this year’s additional order reinforces the company’s commitment to reducing driver risk and achieving ZERO HARM across the business.”