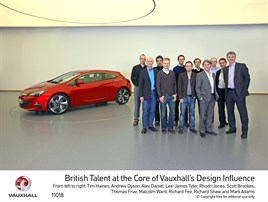 British Designers are playing a major role in the design of Vauxhall’s new generation products and are also influencing pan-European and global designs.

As vice president design for Vauxhall and Opel, Londoner Mark Adams is overseeing all aspects of the exterior and interior design development for the Vauxhall and Opel brands, including strategy, concept and all production vehicles. In this task, Adams is supported by Malcolm Ward, born and bred in the vicinity of Vauxhall's Headquarters in Luton and now Director of Exterior Design. Adams’ responsibility also extends to the design of some significant global products such as the Buick Regal which is based on Vauxhall’s highly successful Insignia and has taken China by storm - also selling well in North America. Thus, Adams and his team of ten Brits are making a big impact in every aspect of Vauxhall and Opel design and beyond - from idea conception to finding technical solutions, their ideas flow from the sophisticated computer screens, through full size clay models, all the way to executed final exterior and interior designs that provide showroom appeal.

“There is no doubt of the impact our British designers have on our cars’ final look and feel,” says Vauxhall’s vice president for design, Mark Adams, speaking from the Geneva Auto Show where the all-new Zafira Tourer Concept makes its world debut. Mark added: “Elegant design details are encapsulated in all areas of our new generation products giving Vauxhall cars a much coveted, premium feel’.

“Vauxhall leads the UK in style and design - the great response our cars receive speaks for itself,” says Vauxhall Motors’ managing director Duncan Aldred. “Our British-centric design team ensures an appeal to British buyers that only Vauxhall can offer. Subtle details like chrome-framed windows and ambient red interior lighting lead to a sales success for Vauxhall that makes the UK GM’s biggest European market and the fourth largest in the world.”