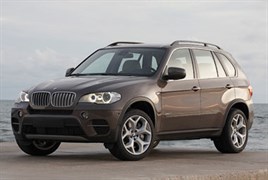 BMW X5, Land Rover Range Rover, BMW M3 and the Audi RS4 remain the UK's most desirable cars for today's thieves, according to the latest figures from stolen vehicle recovery expert, Tracker. These four cars all retain their top positions in Tracker's top ten most frequently stolen and recovered vehicles of 2010.  65 per cent of the vehicles recovered by Tracker last year were worth an average of £25k. Tracker reminds motorists to think security and remember that thieves don't just target cars with a large price tag.

"Once again our top ten shows the thieves favourites with the Mercedes SLK and CLK also remaining at the top of the league," says Stephen Doran, managing director of Tracker. "The VW Golf is an interesting new entry at number nine, proving that it's not just owners of prestige vehicles who need to take note. In fact, 65 per cent of the vehicles we recovered in 2010 were worth £25k or less with just 6 per cent being worth £50k to £100k."

Doran continues, "These figures show that all car owners are a target for thieves.  And with 84 per cent of all the cars we recovered last year being stolen using the keys, we remind every car owner to keep their keys safe at all times.  However, having a tracking device fitted will significantly increase the chances of police locating and recovering a stolen vehicle. Tracker works like an electronic homing device, combining GSM, GPS and VHF technology to provide the ultimate in peace of mind should the worst happen."

Tracker works with all 52 police forces in the UK; a relationship that has led to over 2,000 arrests. Tracker systems include signal jamming detection and work even if the vehicle is hidden in a container or taken underground.

Concludes Doran:  "With the most robust stolen vehicle technology in one discreet unit, Tracker is a major defence in helping car owners protect themselves from thieves."

Tracker's ten most stolen and recovered;