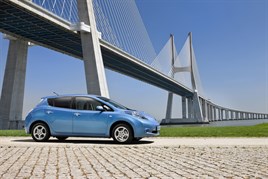 The reigning European and World Car of the Year earned an 89% rating for adult safety, an 83% rating for child protection and an 84% rating for its on-board safety assist systems, which include Electronic Stability Control (ESC) and a speed limiter as standard.

The compact family hatchback also earned a higher-than-average 65% score for pedestrian safety, thanks in part to the low nose design and the comparative lack of ‘hard points’ under the bonnet.

“The Nissan LEAF proves that EVs can achieve the same safety levels as traditional cars. The standard is now set for the next generation of such cars on the European market,” said Euro NCAP secretary general Michiel van Ratingen.

Nissan LEAF’s safety assessment followed standard Euro NCAP procedure, with tests for frontal impact, side impact, side pole impact and whiplash. The car’s 48 lithium-ion battery modules, which are housed in a special compartment beneath the floor, completely withstood all the impacts.