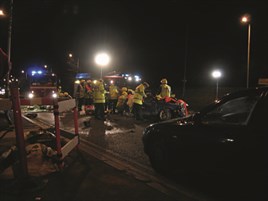 Road safety charity the IAM launched its ten-year road safety strategy, which proposes that the road safety industry should aim to reduce road deaths on UK roads to 1,000 a year by 2020, saving 1,000 lives over the period. The strategy supports the UN Decade of Action for Road Safety 2011-2020.

With the vast majority of crashes caused by human error and lapses in concentration, the IAM believes that tackling driver and rider behaviour is the key to cutting road deaths.

The key focus of the strategy is to target those drivers at highest risk:

For its part the IAM is developing products, such as Momentum for young drivers and DriveCheck 55 for older drivers, as well as promoting advanced driver, motorcycling and cycling training.

These are proven to improve road safety.

The IAM also want to see driving on rural roads - the most dangerous – to be part of the driving test and a new post-test training system for young drivers which builds on the success achieved in Austria. There, further training in the first 12 months after passing the test has reduced young male fatalities by nearly 30 per cent.

The IAM’s driver training company, IAM Drive & Survive, will be working with businesses to train their company drivers and will encourage these companies to only use suppliers who make sure their employees are trained as well.

IAM chief executive Simon Best said: “We want to see five-star drivers in five-star cars on five-star roads.Cars and roads are getting safer so it’s time to concentrate on the driver by improving their skills and behaviour. Over the decade we will work with around 200,000 road users through education and coaching on driving, riding, cycling and commercial driving. That’s 20,000 people a year who will be safer.

“As the government looks to publish its road safety strategy we believe that over 1,000 lives can be saved in the next decade by continued partnership between government, local authorities, enforcement agencies and education bodies. This also means a cost saving to the UK economy of £1.8 billion over the period, with each fatal accident costing society £1.8 million.

“But 1000 deaths is still a tragically high figure. Everybody needs to work together to reduce it further. For example, insurers should offer discounts to young drivers who have taken more training after their test.

“Equally every individual has to take responsibility for their own road risk, whether that is taking the initiative to improve their driving through further training, or simply taking a bit more care.”