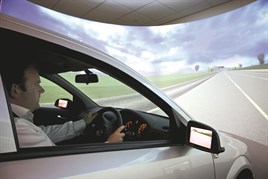 Balfour Beatty has unveiled the latest addition to its armoury that aims to help it achieve ‘Zero Harm’ by 2012.

Primarily aimed at commercial and HGV drivers, it has invested hundreds of thousands of pounds in a new mobile driving simulator.

It joins the static driving simulator, which was built at the company’s Derby site, and was unveiled shortly after the Zero Harm campaign was originally launched in 2008.
However, the company’s target of achieving Zero Harm by 2012 was dealt a desperate body blow last year.

It suffered five fatalities in 2010, with one of those five being killed on the road, despite its investment in education and training.

However, there have been none so far in 2011 and James Burrows, professional services manager at Balfour Beatty Plant and Fleet Services, is adamant that they will still succeed.

“We are confident as a business that we will achieve Zero Harm next year,” said Burrows. “It is not an option to fail in that goal.”

However, he told business leaders at the launch of the mobile driving simulator at its head office in Derby that the organisation still had a “major problem”.

It’s an honesty which has been helping to drive the Zero Harm campaign since its launch in 2008.

In 2007, Balfour Beatty drivers had 3,300 collisions, resulting in costs to the business of £5.7 million, before it committed to the Zero Harm campaign.

Its overarching aim is that the company will cause no harm to its workers, suppliers, customers and members of the public by 2012.

The policy extends to upwards of 500,000 people, including staff, sub-contractors or partners across the globe.

“It was central to our ethos and goal as a business when the Driver Risk Management team was pulled together that we spread the message of road safety and driver awareness as far as possible,” explained Burrows.

“Ultimately we want to make the roads a safer place to be and sharing best practice as well as offering training outside Balfour Beatty is central to this.”

Up to now, it has been educating and training people within the group and any external work has been mainly channelled through its supply chain and its customers.

For example, Balfour Beatty Rail Projects achieved a 40% reduction in driving incidents after drivers undertook their first round of training in 2009.

“The impact of that is clear for employee safety,” said Burrows. “But it also indicates a potential cost reduction in repair costs of over £100k in the two year period.”

But with the launch of the mobile driving simulator, Burrows is keen for other companies to reap the rewards seen within the group.

“Part of our Zero Harm journey is to ensure we pass on our health and safety message as wide as possible, throughout Balfour Beatty, the contractors we engage with and beyond,” explained Burrows.

“We have seen great success stories from our driver development programme and feel a genuine responsibility to share that so others can benefit.

“Aside from the obvious benefits associated with finance and safety, there are gains to be had in terms of a company’s corporate social responsibility agenda, external recognition through awards, as well as a competitive advantage in tenders.”

Dawn Edwards, head of HSQE at Lafarge A & C UK, attended the mobile driving simulator launch and similarly wants to keep her drivers safe from harm together with the wider public.

“It was inspiring,” said Edwards. “It was great to hear what they had done with regards to driver risk management, tailored training, reducing incidents and how we could be part of it.”Central to Balfour Beatty’s driver training regime is a psychometric risk assessment, developed in association with Cranfield University, which rates drivers on their behaviour and attitude to risk behind the wheel.

Balfour Beatty is offering organisations the opportunity to undergo the Driver Risk Index online assessments from £15 right through to £240 for full-day driver development training for ‘high risk’ drivers, which would typically include sessions on the road or in the simulator.