Mini sets out plans for two-seaters 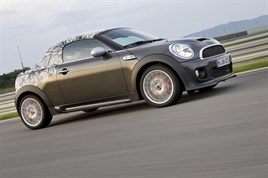 Britain’s favourite small car brand will be offering a choice in two-seater motoring in the next 12 months.

Company officials have confirmed that the coupe version of the Mini that will be launched in October is to be followed by an open top model in 2012.

The cars are the next phase in ambitious plans to extend the trendsetter premium small car range to as many as 10 models over the next five years.

"We’ve enjoyed phenomenal success since the rebirth of this iconic car. The Clubman and Countryman versions have maintained our progress and we think the increasing trend toward downsizing leaves us best placed for the future," said product and planning manager Lee Connoll.

Speaking at a BMW Group future mobility event staged at the Mini factory in Oxford, he told Fleet News: "This brand is all set to continue to grow. Mini has gone from being an individual model to a band of cars and we’ve not finished yet.

"Even though a final decision on adding a car based on our Rocketman concept still has to be taken, I think production is a distinct possibility – we’re keen to reintroduce the two-seater sports car."

Connoll said company research indicated the Coupe would rival the Peugeot RCZ and Volkswagen Scirocco and would also be an alternative to the Audi TT.

"This is a segment of the market that is growing and we are keen to compete. The Coupe has the looks, the performance and all the ingredients it needs for success," he said.

Based on the Convertible platform, the car will be the German group’s first model to feature an active rear spoiler to assist stability at speed.

"It automatically rises at 50mph and retracts at 37mph – but we’ve considered the poser factor and fitted an override button to allow it to be raised at any time at the push of a button," said Connoll.

The fixed-head model will also feature striping on the bonnet, roof and bootlid as standard and will come in Cooper, Cooper S, Cooper SD and John Cooper Works versions.

"At first sight, a two seater coupe might not be regarded as business transport but our car is surprisingly practical. With a volume of 280 litres, the boot is bigger than the space behind the rear seats in the Clubman and holds two full-size suitcases. There’s also plenty of space for laptop bags behind the seats and the door panels have large pockets.