LCV values recover in May 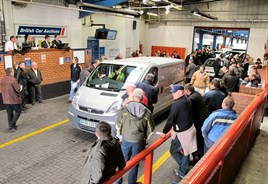 The LCV markets bounced back in May following the disruption caused by the combination of increasing fuel costs, the late Easter, the Royal nuptials, and the hottest April on record.

Figures for May show that average values climbed to £4,218 after dipping to a seventeen month low of £3,969 in April. Sold volumes also climbed – by 6.7% - but have a long way to go to fully recover from the 31% fall recorded between March and April. All three sectors – fleet & lease, dealer part-exchange and nearly-new – saw values improve during May.

Overall, values improved by 6.2% in May, although CAP performance actually decreased by one and half points to 96%. Year-on-year values remain behind by £248 compared to May last year – when the market was peaking in terms of value.

Sold volumes improved by nearly 10% in the fleet & lease LCV sector, with average values increasing by exactly £150 (3.3%) compared to April and halting a three-month decline from the January peak. Year-on-year values are adrift by £402 or 7.9% - with signs the differential is reducing. Fleet vans averaged 95.3% of CAP in May, a two point decline from April.

Duncan Ward BCA’s general manager – commercial vehicles commented, ““Buyer confidence has notably improved following the very disruptive trading conditions experienced at the back end of April. May had the feel of a typical late spring/early summer marketplace, with some price pressure on poorly presented vans but lots of interest for the most desirable vehicles. Sales volumes and conversions have improved and supply and demand is reasonably well balanced.”

He added “Condition remains the critical factor in price performance and looking after vehicles and delivering them to the marketplace in “cared for” condition is central to ensuring good residual value performance. Quality stock will always deliver the best possible returns in the used LCV arena.”

“The mix within the fleet sector has improved as most of the vans from the business failures and liquidations in late 2010 have now washed through. However, it highlighted to sellers that vans in non-retail colours and a low specification need to be sensibly valued if they are to be remarketed successfully.”

Ward concluded “Despite continuing wider economic concerns, small businesses continue to support the used LCV sector strongly, particularly in the budget end of the market. Interest on vehicles valued in the £1,000 to £2,000 price range remains exceptionally strong, but condition is still an important factor – a clean and tidy high mileage vehicle is arguably more saleable than a lower mileage, younger but poorly presented example. Late year product remains exceptionally rare and difficult to source and as a result examples are hugely coveted by professional and non-trade buyers alike.”