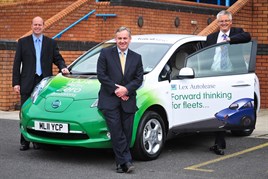 One in four drivers (24%) are sceptical about the claimed low running costs of hybrid and electric vehicles, according to a survey by Lex Autolease.

Lex Autolease's poll of company car drivers coincides with the arrival of its first pure electric vehicle - the Nissan Leaf - which runs entirely off battery power.

Mark Chessman, head of sustainability and commercial management at Lex Autolease, says: "Whether EVs will become a mainstream option is dependent on real life testing in urban town traffic and motorways as well as through hot and cold weather, which may have a major impact on range, performance and cost. If it's proven there is a niche they can work in for the fleet sector, the future looks bright.

"There may well come a tipping point where a critical mass of companies will be willing to lease these vehicles in significant volumes. This should coincide with maturity in the recharging network, which will support drivers wherever they are - at home, in public places and in the workplace. The popularity and speed of uptake will also be driven by the cost of the vehicles relative to conventional technology and the comparative cost of fossil fuels, which are expected to increase significantly over time."

Chris Chandler, principle consultant for Lex Autolease, says: “ In the winter months, it is known that electric vehicles will have lower range capabilities as the car will use more energy for things like the heater, windscreen wipers and lights. Understanding the seasonal variance for vehicle range will be important when considering where electric vehicles will be suitable.

"As a market leader, we need to be absolutely on top of this new technology and be able to provide clear advice for our customers. They are currently showing high levels of interest in these vehicles and, for some, we've even been able to arrange fast-track delivery of their own electric vehicles.