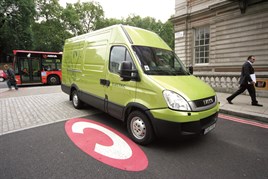 Van fleet operators could be given a greater incentive to switch to electric or gas-converted large panel vans as they could gain a free GVW increase.

The Freight Transport Association (FTA) has been lobbying the Government to allow a gross vehicle weight of 3.9 tonnes or higher to allow for the weight of a battery in an electric large panel van or an additional tank for a gas conversion.

It would mean organisations whose fleets typically are limited to vehicles with a 3.5-tonne GVW could run greener vehicles without compromising payload or breaching the limit where an O Licence would be required to run the fleet.

It would remove an extra layer of bureaucracy for firms that otherwise would not need to comply with the requirements for an O-Licence, designed for operators of much heavier vehicles than panel vans.

The FTA has long called for an exemption and, according to James Hookham, director of policy and communication at the FTA, there is a real possibility the Government will agree.

“Operators do not need an O-Licence if vehicles on their fleet do not exceed 3.5 tonnes GVW,” he told delegates at the Fleet Van Summit on June 30. “But adapting vehicles for gas tanks or batteries will increase the weight of the van. The FTA is seeking an exemption for converted vans of up to 3.9t GVW.

“We have taken the proposal to the DfT asking for this change from 3.5 tonnes to 3.9 tonnes to preserve the payload of alternatively-fuelled retro-fitted vehicles.”
Hookham believes such a policy would fit in with current government aspirations, and said that discussions with the DfT so far had been positive, making him optimistic that an exemption would be offered.

“It would help encourage carbon reduction, as well as the take-up of electric vehicles,” he said. “It would fall in line with the Government’s commitment to remove unnecessary red tape. It would be a business-friendly policy.”

In the past year, the Government has set up the Red Tape Challenge which gives interested parties a chance to advise on how regulations are working, what can be simplified and what should be scrapped.

Hookham also said such a measure could be time-limited until van manufacturers make allowances for alternative fuel technology in the design of future generations.

Such a move is likely to be welcomed by vehicle converters and van manufacturers who offer alternative fuelled vehicles.

Iveco worldwide network director Hank van Leuwin said an incentive such as this one would boost sales which would help bring down the cost of EV technology more quickly.

He said: “We have done our bit to try to help the environment by producing a zero emission electric Daily but if this project is to come to life we need more incentives from the Government.

“In France, the weight of the batteries – around 300kg – is excluded from the vehicle’s payload. A move like this in the UK would help us sell more of these vans.

“We need Government support because at present, it would take 17 years to get a payback from using an electric Daily instead of a diesel one and this is clearly unacceptable.”