A new, green, lease of life for Nissan EV batteries 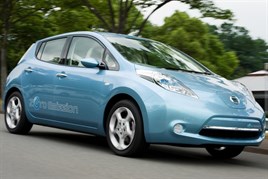 Nissan is planning how to give the batteries from its electric vehicle, the Nissan Leaf, a second life in the power generation industry.

Besides reusing the battery, the new use for it will allow excess power from renewable sources such as solar and wind generation to be stored and then released at peak times, reducing the need for conventional power stations to be kept on standby.

A fully charged battery in a Leaf holds enough energy to power a three-bedroom home for around three days (8kW/day). It has potential to store electricity generated by solar and then release it when the sun isn't shining, or give the ability to use wind power even when there is no wind.

"The Nissan Leaf has only just been launched, but we have to think now about how we will dispose of the car when it comes to the end of its life," said vice president, Vehicle Design & Development, Nissan Technical Centre Europe. "Although the Leaf is designed to last as long as any conventional car, some batteries will become available from accident-damaged cars sooner and we must manage the use of the parts now."

While a used engine has limited scope to be reused, the manufacturer claims the battery second life usage is expected to give them - and therefore the Leaf - a significant resale value.