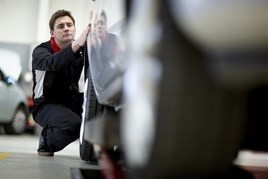 Thousands of vehicles are written off by insurance companies every year, because their repair is deemed too expensive relative to the vehicle’s market value.

However, the additional cost of writing off such cars rather than repairing them has a disproportionately negative effect on Vauxhall owners, insurers and the manufacturer.

Outstanding finance on a vehicle can often mean owners owe more for the written off vehicle than its market value, leaving them in negative equity when the settlement payment comes through.

For the insurers, that almost certainly means losing a policy holder disappointed with the financial situation they are left in, and a higher cash payout to replace a vehicle rather than repair it. Manufacturers and the motor industry suffer as they miss an opportunity to supply parts and labour in repairing that vehicle.

In an effort to do its part to reduce the number of category C and D vehicles being written off, Vauxhall has launched a new discount scheme, the Total Loss Avoidance Programme (TLAP), on crash repair parts. TLAP is a partnership between Vauxhall and its Approved

Bodyshop Network to make a contribution to a defined ‘crash parts basket’. That basket is made up of approximately 42,000 GM designated crash parts.

Tony Neff, Vauxhall accident repair channel manager, said: “The cost of crash repair parts is often too expensive for the insurer to justify getting the vehicle fixed; therefore many vehicles that could be easily repaired are instead being written off, due solely to the cost of parts.

“This results in the consumer having to replace their car, the insurance companies with a hefty payout and a significant loss of business to Vauxhall Approved Bodyshops, who would otherwise have been able to carry out repairs.

"To avoid this, TLAP offers substantial discounts on bundles of crash parts, which will mean that we will be able to carry out repairs to many cars classed by insurers as category C or D. The amount of discount is dependent on the part, but can be as much as 50%.

“Motorists have the right to choose where their vehicle is repaired following an accident and the introduction of TLAP gives Vauxhall owners even more reason to turn to Vauxhall Approved Bodyshops.”