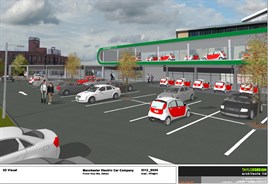 Manchester Electric - a new network of charge points and Pod Centres - will be launched across Greater Manchester this autumn.

Manchester Electric Car Company (MECC) together with its partners will launch the first of 300 charge points and six larger Pod Centres to bring the electric vehicle (EV) revolution to Greater Manchester.

Manchester Electric will be a new network of Centres where people can buy a range of electric vehicles including cars, vans, scooters and bikes. There will also be centres where drivers can lease, hire and charge EVs, as well as being able to join an electric car club, shop or buy a coffee. Domestic appliances – also known as smart charging systems – that will enable drivers to charge their vehicles at home will also be available.

The Pod Centres will be in key sites including Manchester Airport, Manchester City Centre, Oldham, MediaCityUK, Stockport and the Trafford Centre, with more to follow. MECC’s medium term plan is for around 25 Pod Centres across greater Manchester.

Staff in the Pod Centres will be on hand to educate drivers about EVs as well as offering vehicle sales and hire, after sales care and retail facilities.

In addition there will be around 300 charge points across Greater Manchester where commuters can charge EVs through fast and rapid points. As a guide, a fast charge point (32amp) charges a vehicle in two - three hours and a rapid charge point takes around 30 minutes.

The programme to establish the network of charging points will be delivered over a two-year period. A consortium from Greater Manchester, led by the Association of Greater Manchester Authorities (AGMA) secured £3.6million of support through the Government funded ‘Plugged In Places’ scheme.

This has been match funded by a private consortium led by MECC, a new private sector company, which will manage and deliver Manchester Electric along with its partners. MECC will help to accelerate the move of electric cars to mass market and provide users with all the information they need through the Pod Centres.

The scheme is sponsored by AGMA and the Greater Manchester Environment Commission.

Ron Stratton chief executive Officer of MECC, said: “Electric vehicles, from family cars to scooters or fleet vehicles, are going to transform the way we live and work. With new vehicles being released by major manufacturers, and with the cost of motoring continuing to rise, now is the time to switch over. The future is electric.

Chair of Greater Manchester Environment Commission, Cllr David Goddard, said: “With the assistance of the Government’s Plugged in Places scheme, we are going to see a first class charging network installed right across Greater Manchester. Studies show that a network such as this is the key to getting drivers, and fleet managers, to consider a switch to electric.

“This will also be a vital part of helping Greater Manchester hit its targets for reducing carbon emissions.”

The Committee on Climate Change – the Government’s climate advisors - says that the UK needs to have 1.7million electric vehicles on the road by 2020 if carbon reduction targets are to be met.

Legally binding emission reduction targets are also in place to reduce greenhouse gas emissions by at least 34 per cent by 2020.

Greater Manchester is signed up to these reductions – a goal that can be reached with electrical vehicles in a pivotal role. EVs have zero emissions at point of use and have lower carbon emissions overall. These emissions can drop further still as electricity production decarbonises through an increase in low carbon generation.

MECC is working closely with AGMA to look at how the scheme will fit with public transport. A smart card is currently being developed which drivers will use to be able to access the charging points. It will also be an Oyster-style card that will be interoperable on public transport and EVs.