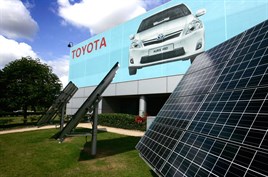 Toyota and British Gas threw the switch to launch an industry-leading initiative in sustainable energy generation at Toyota’s Burnaston car plant this week.

The solar power system has officially come on stream at the Derbyshire site, ready to help meet the factory’s electricity demand and reduce its carbon footprint.

The project adds to the plant’s environmental profile as one of Toyota’s five standard-bearing worldwide “eco-factories”.

An “array” of about 17,000 solar panels has been installed at Burnaston, covering 90,000m2 of industrial land within the site. It has the capacity to save 2,000 tonnes of CO2 emissions from the complex each year, and realise an energy saving equivalent to 4.6 million kWh – roughly the power needed to build 7,000 cars a year.

The solar power system is complimented by a range of showcase energy saving features that have been introduced around Burnaston’s manufacturing shops. These include a brise soleil, which is a sunshade of solar panels fitted above the windows, and a wall of solar glass to replace existing windows.

The solar panels in the main array cost more than £10million and are all British-manufactured. They were installed and paid for by British Gas, which is claiming the feed-in tariff – a Government scheme designed to improve the up-take up of solar power generation systems, under which owners are paid for the renewable electricity they produce. Toyota Manufacturing UK (TMUK), which operates the Burnaston facility, will benefit from the free renewable electricity generated.

Tony Walker, TMUK deputy managing director, said: “The launch of the new solar array marks a further significant step in our journey towards low carbon and sustainable manufacturing. This development is a key part of our 'sustainable plant' vision in which our production facilities are designed to work in harmony with our local community and surrounding environment. Our aim is to be a true eco plant producing eco cars built by eco-minded people.”

Colin MacDonald, head of Microgeneration at British Gas, said: “This new solar array – one of the biggest in the UK – demonstrates how an energy intensive industry like manufacturing can lead the way to a low carbon future. As well as improving Derbyshire’s green credentials, we hope it will act as a beacon for other homes and businesses throughout the county to think about renewable energy.”

Frank McArdle, chief executive of South Derbyshire District Council, Burnaston’s local planning authority, said: “Toyota has clearly invested for the future with the installation of these solar panels. This in itself is a sign of the confidence it has in its plant in Burnaston and puts this area at the cutting edge of green technology.”