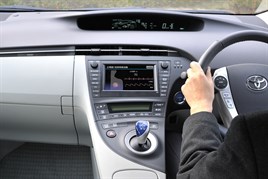 Toyota has announced its latest advances in vehicle safety systems, with a focus on protecting older drivers and pedestrians, including emergency response technology that detects driver health problems by monitoring grip on the steering wheel.

Japanese road accident statistics show that more than half of road traffic deaths are of people aged 65 and over and that pedestrians now account for more fatalities than vehicle occupants.

Learning from real-world accident data, Toyota is continuously aiming to improve its testing, products and services, and to support this, it recently set up the Collaborative Safety Research Center in the USA to work with North American universities, hospitals and research organisations.

Pre-Crash Safety (PCS) with collision-avoidance assist
PCS is an important element in Toyota’s work to develop vehicles that are less likely to be involved in accidents. Currently the system can predict when a collision is imminent and instigate measures to reduce damage and the risk of injury.

It is being further developed to help the driver steer a safe course in an emergency. PCS will monitor a wide range of external factors, including the location of roadside obstacles and approaching vehicles, to judge the collision risks and change the course of the vehicle to help avoid an accident happening.

Adaptive Driving Beam
Toyota introduced an automatic high beam function on some of its cars two years ago, which switches the headlights to low beam when a camera detects the tail lights of vehicles ahead or the headlights of oncoming traffic, then restores high beam as soon as the road is clear.

Toyota has improved this technology with an Adaptive Driving Beam (ADB). This partially shields the high beam light so that it doesn’t shine directly in the face of drivers in vehicles ahead. This means it can prevent glare while maintaining near-high beam illumination of the road, reducing the risk of accidents.

Pop-up Bonnet
Toyota has developed the design of its vehicle body structures to reduce the risk of injury to pedestrians and other road users, using data obtained from conventional crash test dummies and from its THUMS (Total Human Model for Safety) virtual-human computer models.

It has developed a new pop-up bonnet that can reduce the risk of head injury in a collision with pedestrian. It automatically raises the rear of the bonnet to increase the space between it and the engine, which means it can be effective even on vehicles where the bonnet is set low, with limited clearance underneath.

Emergency response technology
Drivers collapsing at the wheel due to a heart attack or a sudden black-out can cause serious accidents. Toyota has developed a new system that can monitor cardio-vascular functions through the driver’s grip on the steering wheel and detect risks.

Toyota plans further research with a view to bringing a system to market, and it has recently presented details of the concept to the Japan Medical Congress.