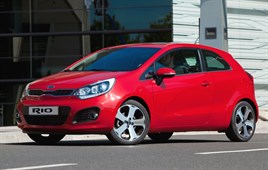 Kia is celebrating the world premiere of its new Rio three-door model at the Frankfurt Motor Show.

Designed primarily for the European market, the new Rio three-door will expand the appeal of Kia’s latest B-segment model. Ultimately, Kia expects the Rio three-door to account for approximately 20 to 25 per cent of total Rio sales.

In most European markets, Rio three-door will be available with the same range of powertrains, equipment and options as the five-door. The new model will offer customers a choice of four three- and four-cylinder engines – with a 75 to 109 ps power range.

The fastest Rio three-door will accelerate to 62 mph in 11.5 seconds and be able to reach a top speed of 114 mph. Fuel consumption will be as low as 88.2 mpg for the newly-introduced EcoDynamics diesel model, which will also deliver a CO2 rating of 85 g/km.

With two bodystyles for new Rio, plus the already-popular five-door Soul and Venga B-segment models, Kia is confident of capturing an even larger share of the increasingly popular compact car market in Europe. The three-door Rio will go on sale from early 2012.

Completely refreshed, the latest Kia Soul being shown for the first time to a European audience at the Frankfurt Motorshow will offer consumers a more refined appearance, new powertrains, a higher specification, a more premium feel to the cabin and even greater potential for personalisation.

Kia has sold more than 45,000 Soul cars in Europe since its launch in early 2009 and expects the refreshed model to continue to appeal to thousands of consumers as a popular, bold alternative to conventional B-segment vehicles when it goes on sale in October.