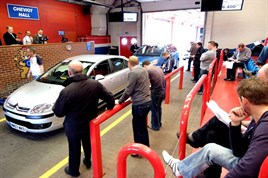 The overall value of used cars sold last year reached a record breaking £35 billion as the used car market continued to lead the recovery in the motor industry.

Figures released from the 2011 Used Car Market Report published by BCA and written by Professor Peter Cooke show that an extra 270,000 used cars were sold last year compared to 2009, generating an additional £800 million in value.

The average used car selling price slipped year on year, however, from £5,422 in 2009 to £5,332 in 2010, reflecting the changing mix of the used car supply in the UK.
The report highlights that the UK car parc is ageing as fewer new cars have been sold since the economic crash of 2008.

Looking ahead, the Report also suggests that a lack of supply of good quality 2-5 year old used cars is a significant concern for the UK motor industry. Since the 2008 economic crash, around 500,000 fewer new cars are sold every year and industry forecasts suggest this pattern is unlikely to change before 2012. As the BCA Used Car Market Report points out, you cannot remove over two million new car sales from the used car supply chain without creating waves in the marketplace.

While the number of cars in the UK (the car parc) will remain around 30 million units for the foreseeable future, the parc is ageing rapidly and ‘younger’ used cars will become an increasingly scarce commodity.

“The simple fact is the UK car parc is getting older, as fewer new cars are sold and both motorists and businesses have held onto their vehicles for longer” said Tony Gannon, Communications Director, BCA. “The average age of cars on UK roads rose in 2010 to 7.25 years, which is a 14 year high. The trend for older cars is rising and we believe this could continue for several years to come.”

Will motorists be able to source the cars they need?

Gannon commented “Low mileage is likely to become an increasingly desirable factor for used car buyers, because examples will be relatively scarce compared to five years ago.”

What to buy next?

The number of motorists who think they or a family member will ‘certainly’ or ‘quite likely’ buy a used car in the next 12 months, dropped two points in this year’s survey to 14%.