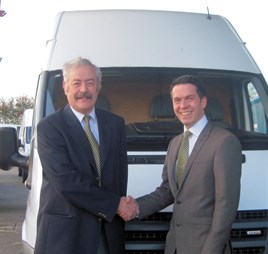 The company has also announced it will be expanding the commercial vehicle remarketing facilities at Measham with the opening of an additional auction hall later in the spring.

Burr joined BCA in 2002, as a trainee manager at Measham Commercials. He was promoted to operations and marketing support manager for LCVs in 2004 and subsequently became LCV manager, first at BCA Birmingham and then at BCA Blackbushe in 2008. Most recently he was sales manager at BCA Bedford.

In his new position at Measham Commercials, Burr will be responsible for the day-to-day running of the branch, improving customer service and focusing on new business development.

“My aim is to continue to build BCA Measham’s reputation in the commercial vehicles sector, particularly focusing on our expertise in sales of HGV, plant and farming equipment” he said.

“We currently have an expanding sales programme, selling LCVs on a weekly basis, for a number of a large contract hire, fleet and dealer groups including Lex Autolease, LeasePlan and Ford retail. I am therefore delighted to be able to announce the construction of a second auction hall which is scheduled to be formally opened in March 2012.”

Sheffield brings a wealth of commercial vehicles experience to his new role gained at BCA over a thirty year period.

He said: “BCA Measham has a well-deserved reputation as the premier selling platform for commercial, leisure and agricultural equipment serving the Midlands and further afield.”