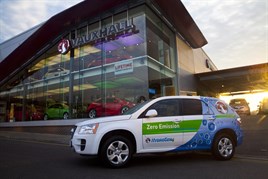 International companies from the utility, gas, infrastructure and car manufacturing sectors are joining with the Government to launch a joint project to look at the potential for hydrogen transport to deliver economic and carbon reduction benefits in this country.

UK H2Mobility will look at what’s needed to make the UK a serious global player in the manufacturing and use of hydrogen fuel cell electric vehicles before developing an action plan for an anticipated roll-out to consumers in 2014/15.

GM/Vauxhall have been investing in research and development of hydrogen fuel cell technologies for over a decade. Supported by an extensive test fleet in Europe and the US with over 100 fuel cell vehicles logging around 2 million miles since 2008, Vauxhall expects the technology to be ready for market introduction by 2016.

Bill Parfitt, Vauxhall Motors’ director for Government Affairs and Public Policy, said: “Following our company’s unrelenting focus on hydrogen fuel cell technology development, the launch and successful roll-out of these vehicles will now depend on the availability of hydrogen to the consumer in a real life environment.

“We therefore greatly appreciate this very timely initiative, gathering various stakeholders, under government lead, to establish an adequate strategy for future hydrogen development in the UK.”

Project infrastructure spokesman Kevin Michaelis, who is regional vice president of Liquid Bulk/Generated Gases–Europe, Air Products, said: “This project brings together the leading hydrogen infrastructure providers, at the forefront of deployment worldwide, with the common goal of supporting the rollout of hydrogen transport across the United Kingdom.

“Working together with Government and leading car manufacturers we can support the creation of a hydrogen transport infrastructure that will dramatically cut harmful vehicle emissions and move the UK towards a zero carbon transport system.”