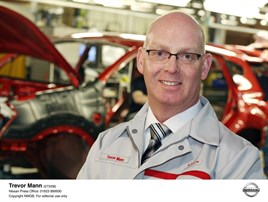 On receiving the honour, made in recognition of his services to business in north east England, Mann said the award reflected the team effort that has underpinned the success of Nissan's record-breaking Sunderland plant.

He joined Nissan Sunderland plant in 1985 as a team leader, ahead of the start of Bluebird production. In 2010, the factory became the first UK car plant ever to make more than 400,000 vehicles in one year.

Mann, who is 50 and has three children, now oversees the manufacturing, purchasing and supply chain functions not only at Sunderland but also at Nissan's factories in Spain, Russia and in South Africa.

He said: "I am honoured and delighted to receive this award. The recognition is very flattering but is without doubt a reflection of the success Nissan has enjoyed, which has been a result of a sustained team effort over many years."