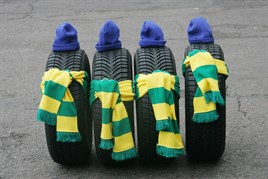 Mondial Assistance has revealed that UK motorists are ignoring the safety and performance benefits of winter tyres, despite continuing news of a big freeze creeping across Britain. Whilst recent government figures reported that over 18,000 road accidents in the UK were caused by snow or ice in winter. 66% of motorists surveyed by Mondial Assistance said they won’t be fitting winter tyres, 46% of whom said it was because the tyres cost too much money.

Mondial Assistance warns motorists to consider the safety risks they expose themselves, passengers and pedestrians to, by failing to prepare their vehicles for driving on snow and ice and urges them to follow the example set across much of Europe, where winter tyres are standard practice even in countries with similar climates to the UK.

Giving further cause for concern, only 27% of respondents said they were prepared to consider buying wheel snow socks. Snow socks are a strong fabric which fit over existing tyres to improve grip in snow. Only 4% of those surveyed were considering snow chains. 33% of the female respondents surveyed by Mondial Assistance said they refuse to drive in the snow, compared to just 10% of men.

“Over the last two winters, the UK has suffered from severe weather and more is expected to come early in 2012. Yet despite the fact that 64% of motorists in our survey said driving was more difficult in the snow last year, many people are reluctant to invest in winter tyres or alternatives such as snow socks,” says Lee Taylor, automotive director for Mondial Assistance UK.

“However it was only just over a year ago when motorists got caught out by the unusually early snowfall, demand outstripped supply for winter tyres, so it makes sense to buy them now and be prepared.”

Taylor concludes, “Many respondents see cost as a deterrent to fitting winter tyres, but some motor manufacturers are responding to this with cost effective winter tyre packages, helping drivers prepare for bad weather. Indeed some manufacturers are offering winter tyre programmes which include storage for summer tyres, providing motorists with an affordable and convenient service, designed to get them ready for wet and wintry weather.

“The latest government figures clearly show that snow and ice are very real issues when it comes to road safety, so you can’t afford to be too careful. But UK drivers appear to be dismissing the idea of winter tyres, putting cost above safety. In some regions across the UK we are seeing snowfall like we saw last year, and many motorists will be risking the increased chance of an accident or at the very least, getting stuck. Winter tyres are an investment if swapped half way through the year with summer tyres as both sets will wear half as much. But fundamentally, winter tyres offer increased performance and safety, helping to keep you on the road and reduce the risk of an accident for several winters to come.”