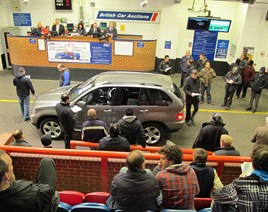 The figures from British Car Auction’s (BCA) latest Pulse report say the increase was due to the combination of increased demand, fewer trading days and a lower volume of stock reaching the wholesale market.

Average values rose to £6,451, the highest figure on record since Pulse began reporting in 2005. Some of this was down to model mix, but the increase also reflects a very competitive trading environment seen in December.

In the part-exchange sector, values fell slightly in December but remained at near record levels as demand for budget vehicles continued to be exceptionally strong.

Values rose for nearly-new models by just over £1,000 to reach £19,963, a result of model mix in a very low volume sector and a number of special sales events staged during the month.

Year-on-year, December 2011 was a substantial £546 (9.2%) ahead of the same month in 2010, when heavy snowfall was a critical factor and conditions proved logistically challenging for buyers and sellers alike.

BCA’s communications director Tony Gannon said: “December provided another relatively strong performance in the used car market, as professional buyers competed strongly for stock in the run-up to Christmas – a trend we have seen over a number of years now.

“However, it is worth factoring in the much reduced trading period and reduced volume – down by some 37% - which meant model mix had a bigger role to play in average values during December than at any other time of the year.

“Otherwise, the overall picture remains very similar to recent months, with a good balance between supply and demand.”