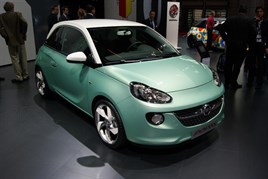 Trendy new car models are set to win back the market share Vauxhall will lose this year after pulling out of low-profit deals with major fleet operators.

Greater success in the showrooms is already starting to take the sting out of the move that is expected to cost Britain’s second biggest vehicle supplier a one per cent drop in registrations, it was revealed in Paris.

“As the fastest-growing retail brand in the industry so far this year, we have narrowed the gap on Ford by a significant amount and stretched the gap on Volkswagen in the number three position – not a bad achievement for a company that’s been going for 110 years.

“Our plan to draw back on some fleet business is working and I think our growth over the next two or three years will more than account for the numbers we’ll drop from fleet.

“Now we’re stepping on the gas in a big way and I expect us to really push on from here,” chairman and managing director Duncan Aldred told Fleet News as GM’s new ADAM city model made its world debut.

“Cars like this will have relatively low fleet penetration and I’d be surprised if business users accounted for more than 20 per cent of the 15,000 units I hope we sell next year. But this is something people wouldn’t expect from us and it will be great if it gets them to stop, look, smile and then reappraise Vauxhall as a brand,” he said.

Available from February, the new three-door model is 3.7m long, priced between £11,255 and £14,000 and is the first Vauxhall to offer automatic parking as an option.

With trims designated as Jam, Glam and Slam, the car claimed to be urban-chic and with almost limitless potential for personalisation comes with a 1.2-litre petrol engine returning 56mpg with 118g/km emissions and a choice of 1.4-litre petrol motors.

“This is a significant step toward rejuvenating Vauxhall and will help us create a more emotional bond with our customers. It’s a stand out car that turns heads and I think people will fall in love with it – there’s a lot of potential here, but we don’t see this as the first model in a new sub-brand.

“We’ve pitched the prices to be competitive. It’s true that the Corsa could suffer a little from it but I think it will draw a lot from competitors like the Fiat 500, Citroen’s DS3 and the Mini,” said Aldred.

The Mokka sub compact SUV and the Cascada, an Audi A5-size premium convertible seating four and due for launch in spring, are the next moves in building the brand.

“My ambition is for us to be the best automotive company in Britain. We will remain a mainstream volume player – we’re not trying to be anything else – but being number one is not part of that. However, it would be nice to be number one in the small fleet sector,” he said.