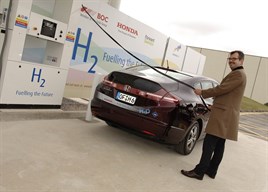 Four major car manufacturers have signed an agreement to support the introduction of fuel cell electric vehicles in Nordic countries.

Honda, Toyota, Nissan, and Hyundai signed a Memorandum of Understanding (MOU) with organisations around launching vehicles and hydrogen refuelling infrastructure between 2014 and 2017.

Honda, one of the pioneers of fuel cell vehicles, recently announced an all-new fuel cell electric vehicle for Japan, the U.S. and Europe, to be launched from 2015, which will showcase further technological advancements and significant cost reductions.

It follows a month-long and high profile Europe Hydrogen Vehicle Road Tour, organised by H2 Moves Scandanavia, which moved across the UK with an event at the UK’s first public-access hydrogen refuelling station based at Honda of the UK Manufacturing in Swindon.

Honda has been engaged in fuel cell research and development since the mid 1980s and has been at the forefront of the industry in both R&D and sales of this technology.

The MOU seeks to generate further dialogue with public and private stakeholders in Norway, Sweden, Iceland and Denmark on accelerating the market introduction of FCEVs and follows an agreement signed by car manufacturers in Europe in 2009, which identified 2015 as a potential point for market introduction in regions where hydrogen refuelling is available.

Commenting on Honda’s involvement in this project, Ken Kier, executive vice president, Honda Motor Europe said: "In 2002 Honda became the world’s first carmaker to put a fuel cell car on the road with regular customers, delivering the Honda FCX Clarity to fleet users in the United States and Japan. We want to continue to lead the way for fuel cell technology across the world including Europe. This MOU signifies that commitment."

The MOU was signed in the presence of the Danish Minister for Transport and the director of the international Energy Agency, directorate of Sustainable Energy Policy and Technology at the 3GF conference in Copenhagen.