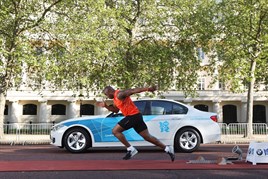 Thousands of volunteers have been given the opportunity to buy a BMW used to ferry around athletes and officials during the Olympics and Paralympics.

The German manufacturer supplied a fleet of 3,200 low emissions vehicles for London 2012, which initially raised fears what effect defleeting so many cars would have on residual values.

However, BMW said the mix of models and specification had been selected specifically not to impact on re-sale values.

The manufacturer’s staff were to be the chief beneficiary of the used cars that only have a few hundred miles on the clock, but BMW has now announced that so-called ‘Games Makers’ are to benefit from the used car offer.

A BMW spokesman said: “I can confirm that Games Makers have been offered the chance to purchase cars from the Olympic fleet.”

All Games Makers have been contacted, using information from the London Organising Committee of the Olympic Games (LOCOG).

The cars are currently in Thorne at the BMW distribution centre where they are being stripped of their livery and refurbished where needed.

The majority of the 3,200 vehicles, which include electric vehicles and bikes, are new to market, including the 320d Efficient Dynamics models which make up the bulk of the volume at 1,550 cars.