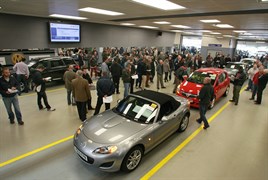 Over 1,200 trade and consumer buyers bought a staggering £7.2 million worth of Lex Autolease cars and vans during a single sale at Manheim Auctions Colchester.

Lex Autolease’s mega sale concept is now in its second year and the largest one day car and van auction to take place in Europe from a single vendor.

This year’s event attracted 20% more buyers than in 2011, with 550 ex-fleet and 250 finance cars, as well as 200 commercial vehicles going under the hammer and achieving an overall conversion rate of 90% against an average 98.5% of CAP clean.

Taking place at Europe’s only four lane car auction centre, the event drew lively bidding from 517 buyers on the auction hall floor who had travelled from as far afield as Tyneside, Glasgow, West Yorkshire and even New Zealand.

In addition, a record 700 online bidders from across Europe, including Ireland, Turkey and Malta, took advantage of Manheim’s half price Simulcast, which enables buyers to take part online via a dedicated internet channel.

“The interest from buyers in the auction hall and online reflects the quality of vehicles on offer. We offer quality and variety in all our Lex Autolease and Black Horse sales.”

Dave Parry, corporate sales director for Manheim, said: “The market had shown signs of softening from late September into early October but the number of buyers attending this sale and CAP values achieved supports Manheim’s view that the used vehicle market is robust enough to weather the current economic storm.”