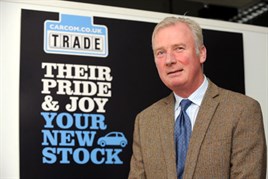 A new online vehicle remarketing company is aiming to take a slice of the used car market from the UK’s more established players.

Carcom.co.uk wants to become a major disposal channel for fleets, leasing and rental companies, as well as vehicle manufacturers, by targeting dealers with a series of online platforms.

“We think there’s a sizeable gap in the market for assisting the dealer network to get back their market share in used cars,” said Carcom’s chief executive Gerry Lynch.

“Dealers must look for new ways to source used cars of all ages – but particularly those up to five years old – to protect revenues and margins.

"Carcom is giving them the opportunity to exchange, source and sell used cars effectively and efficiently.”

The platform, which will go live on January 25, 2013, will include two business-to-business networks: a trade-only fixed price stock locator; and an electronic auction site.

There will also be two retail offerings: a dealer lead generation site called ‘Findacar’ for would-be car buyers; and ‘Sellmycar’ for retail customers to advertise privately-owned used cars to dealers.

It’s been developed with Bluecycle, an online car salvage auction site which is a subsidiary of insurance giant Aviva.

Lynch has worked at BCA, Inchcape and Autologic, while operations director Mark Thomas has held senior roles at BCA, Mercedes-Benz Finance and Pendragon, before a three-year spell at Carsite.

They are joined by commercial director Peter Rosie, who spent 30 years at Wimpey as fleet manager and five years as head of remarketing at Motability.

Lynch told Fleet News that dealers were the best buyers of defleeted stock and a dealer dedicated product would be good news for everybody. “We believe there is a need and a requirement for a different type of service which is Carcom.”

An increasing number of vehicles are being resold through online channels. In 2011, Manheim sold 14% of its vehicles online. It had already exceeded this in 2012 by the end of October and expects it to rise again in 2013.