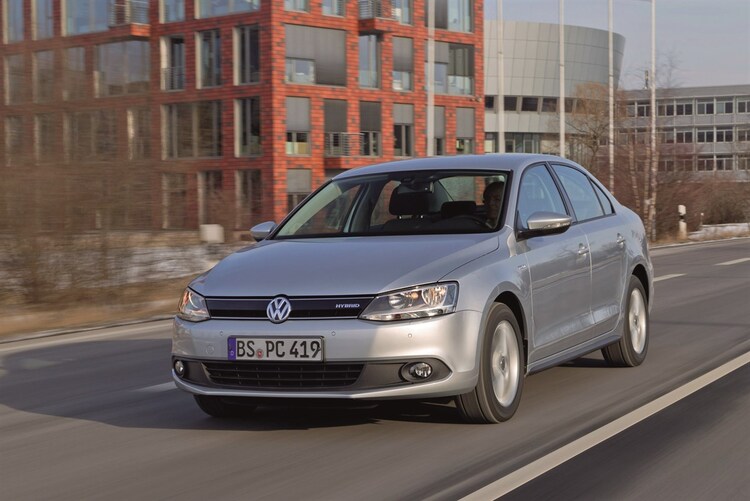 The Jetta Hybrid is making its debut at the Los Angeles Auto Show in production form, as it launches on the North American market. This vehicle is powered by a 1.4-litre 150 PS turbocharged petrol engine and a 20 kW electric motor, together with a seven-speed DSG gearbox.

This makes for fuel consumption that is around 20 per cent better overall than an equivalent petrol-powered vehicle (at 45 mpg US – around 54 mpg Imperial), and also sporty performance, with the benchmark zero to 60 mph sprint taking less than nine seconds.

Like the Touareg Hybrid, the Jetta is a parallel hybrid, which uses a decoupling clutch that can disengage the petrol motor for pure electric drive (or when coasting or braking), disengage the electric motor (for higher speeds or when the battery charge is low), or combine the two units for maximum power.  Using electric power alone, the Jetta Hybrid can be driven at speeds of up to 70 kmh (44 mph) and over a distance of two kilometres (1.3 miles), depending on conditions.  For maximum performance, both the TSI engine and the electric motor combine, giving peak power of 170 PS.  This is the first use of the 1.4-litre turbocharged engine in America, and it offers the same power and more torque (250 Nm, 184 lbs ft) than the normally aspirated 2.5-litre engine that is commonly used in the Jetta in the US.

A lithium-ion battery supplies the energy for the electric motor.  It is located behind the rear seat bench, making no compromises on interior space.  The battery is made up of 60 individual cells, each with an energy capacity of 5 Ah.  Together they produce a nominal voltage of 220 Volts and an energy capacity of 1.1 kWh and weigh 38.5 kg.  Cooling is provided by an integrated fan, operated by the battery’s own management system that performs diagnostic, monitoring and safety functions, including disconnecting the battery in the event of an accident.

Despite the extra weight of the battery, electric motor and additional safety modifications to the vehicle’s structure, the Jetta Hybrid weighs only 100 kg more than the non-hybrid Jetta at less than 1,500 kg in total.

Provided the battery contains sufficient charge, the Jetta Hybrid is switched to electric drive mode either automatically (at speeds of up to 60 kmh or 37 mph) or at the press of a button next to the gear lever (up to 70 kmh or 44 mph).

The Jetta Hybrid launches in North America now; there are no current plans to sell this model in the UK.