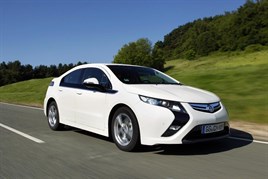 Hybrid vehicles use an electric motor in conjunction with a conventional engine to help reduce fuel consumption and cut CO2 emissions.

There is a supplementary electric motor powered by a battery, which is charged by the engine when coasting or under light load.

There are several types of hybrid:

Mild hybrid: Uses the electric motor to assist the petrol engine and help improve performance. The engine switches off when stationary or when coasting, but the vehicle is never driven by the electric motor alone. The Honda Jazz, for example, is a mild hybrid.

Full hybrid: The electric motor can power the car for short periods at low speeds. The Toyota Auris and Prius, for example, are full hybrids.

Plug-in hybrid: The battery can power the car for a longer range and at higher speeds, although these cars also have a conventional engine and fuel to extend their range. Vauxhall’s Ampera (pictured) is effectively a plug-in hybrid although Vauxhall refers to it as a ‘range extender’.

Most popular type of hybrid

Audi expects fleet operators to favour the plug-in hybrid “due to its greater efficiency potential”.

However, Ian Allen, manager environmental strategy and Ampera at Vauxhall, says: “There’s no silver bullet and different technologies will be better suited to some companies than others.

“The wide range of technologies coming to market give customers the opportunity to assess the options and potentially pick the EV that is most suitable for specific jobs whether that be conventional hybrids, pure EVs, plug-in hybrids or range extenders.

“At the moment as far as we are concerned the Ampera with range extender technology gives the best of both worlds: EV driving experience with ultra-low carbon emissions without range anxiety.”

The Environment Agency has several Vauxhall Amperas and Toyota Prius plug-in hybrids on order and its head of fleet operations Dale Eynon believes that plug-in hybrids “are the way forward in terms of technology” compared to full electric vehicles.

“I expect plug-in hybrids to be the biggest element of our car fleet as time goes on,” he says. “If we were to get 200-300 on the fleet though we would need infrastructure at our offices so that when drivers arrive for a meeting they can charge the vehicle.”

“I can’t really see the benefit of plug-in hybrids,” he says. “All you’re doing is extending the amount of time it runs on electric only. It seems like a lot of bother just to get a few extra miles. As soon as it runs out it will switch back to petrol whereas a full hybrid can run a lot in EV mode at slower speeds.”