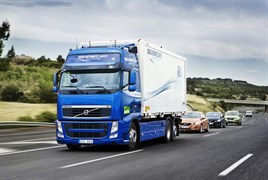 The Safe Road Trains for the Environment (SARTRE) project has shown it is technically feasible for a lead truck to control a convoy of vehicles driving behind it using wireless technology.

The EU-financed project, which involved three years of research and trials, allowed representatives from the EU Commission and experts in transport technology from Europe, the US and Japan to see a fully functioning wireless road train in operation at Volvo’s proving ground in Sweden.

The road train was led by a Volvo FH truck, closely followed by another Volvo truck and three cars.

Wireless technology ensures that the trailing cars follow exactly in the track of the lead vehicle – as though the train consisted of a single vehicle.

The result is that the driver in a trailing car can relax, perhaps read a book or watch TV, while the car drives itself.

Andreas Ekfjorden, project manager for Volvo Trucks’ portion of the SARTRE project, explained: “The gaps between the vehicles are much smaller than in normal traffic, but it is as safe, or even safer to be part of the road train, since it is lightning-quick computers and not human beings who respond to even the slightest change in any of the cars in the train.”

One of Volvo Trucks’ responsibilities in the project was to determine exactly what information needed to be transmitted back down the road train so that the other cars could follow the lead truck.

Ekfjorden said: “All the vehicles in the road train have a roof-mounted antenna so they can receive information from the lead vehicle’s computer system. For instance, if the lead truck starts braking, all the other vehicles in the train brake at exactly the same time.”

The lead truck is also equipped with an alcolock and the full range of active and passive safety systems that Volvo has in production today.

Although the SARTRE project has developed well-functioning road train prototypes there are still challenges that have to be overcome before the system can become an everyday reality.

It is necessary to continue working to boost reliability, which must be on a par with that of an aircraft’s autopilot.

Another challenge is the transition from driving in a convoy to manual driving and vice-versa. It has to be absolutely clear who is responsible for driving a trailing vehicle and exactly when that responsibility is transferred. This is not merely a technical issue, a lot depends on driver acceptance and the necessary feeling of safety and security.

Lennart Pilskog, director public affairs at Volvo Trucks, said: “Despite legislative challenges, there are so many benefits to be derived from road trains – in terms of traffic flow, safety, the environment and not least haulage firm profitability – that I believe this will become a reality in one form or another.”

In the meantime, the research results may be put to use to improve road safety.

The new communication technology (wireless car-to-car and car-to-infrastructure) may be used in both cars and trucks for a wide variety of purposes such as to provide warnings about accidents, obstacles or ice on the road.