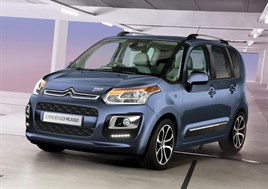 The cabin is updated with a new trim called Mistral ‘Mixou’ cloth, which is specified as standard on all VTR+ models. There’s also the option of a new ‘Claudia Mistral’ full black leather upholstery on Exclusive models.

Citroën’s new E-MyWay satellite navigation system is added to the option list, with extra functionality over the previous MyWay system, but at no extra cost. E-MyWay can also be specified with a reversing camera and rear parking sensors for easier manoeuvres.

Citroën has also uprated the power output of the HDi 110 engine on the C3 Picasso Exclusive, renaming it HDi 115. The slight increase in power has no effect on the model’s fuel economy or CO2 emissions.