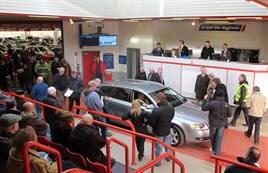 CAP performance improved by just over one point to 97.58%, with the average age of 3 years and four months and mileage of just over 50,000 remaining reasonably static compared to previous months. Year-on-year values were behind by £304 or 3.9%.

This supports BCA’s stated view that December’s record values were influenced by a combination of the shortened trading period, reduced volumes and a richer model mix during the month.

BCA’s communications director Tony Gannon said: “Although January has traditionally recorded an increase in average values, 2012 saw the headline value fall month-on-month as was the case in January 2010, which may have been weather related.

“Despite this, values are up year-on-year and, with reasonably consistent demand, prices should be maintained at an acceptable level over the coming weeks.”

He added: “The rise in average prices at the ‘value-for-money’ end of the market continues unabated and this must be a reflection of the current economic conditions. As household budgets remain squeezed, the increased demand from motorists for affordable transport is driving values upwards.”