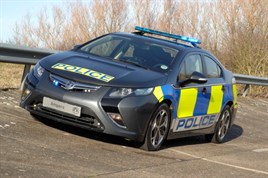 Vauxhall has won a competition run by the Association of Chief Police Officers Intelligent Transport Systems (ACPO ITS) to demonstrate an electric vehicle that uses cutting-edge crime-fighting technology that could be introduced into active Police service by 2015.

The Vauxhall Ampera, which is on the shortlist for both World Car of the Year and European Car of the Year, is equipped with a range of high-tech kit to help Police officers fight crime, including:

The Under Secretary of State for Crime and Security, James Brokenshire, was given an in-depth demonstration of the crime-fighting technology on the Ampera by Jim Hammond, Chief Superintendent, ACPO ITS.

Dick Ellam, Vauxhall Special Vehicles Manager said: "We are delighted to have won the ACPO ITS competition and are excited to have displayed the fittingly ground-breaking Ampera featuring this array of cutting-edge equipment."