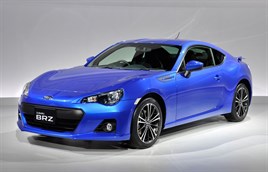 Subaru will exhibit the new BRZ and Impreza five-door at the forthcoming 82nd Geneva International Motor Show (8 to 18 March), marking the European debut for both models.

The 200PS Subaru BRZ – developed as a joint-project between Subaru and Toyota – is a sports car designed to offer maximum driver engagement. Featuring a front-engine, rear-wheel-drive layout, and powered by Subaru’s trademark horizontally-opposed 2.0-litre Boxer engine, this exciting model will deliver impressive levels of grip and handling thanks to the lowest centre of gravity of any production car.

The fourth-generation all-new Impreza, which will also be on display at the Swiss expo, has been designed to offer high levels of refinement and value.
In addition, Subaru will also be celebrating the 40th Anniversary of its Symmetrical All-Wheel

Drive platform at this year’s Geneva show. The technology was first introduced on the Leone estate in 1972 and Subaru’s stand will showcase a number of products from four decades of All-Wheel Drive.