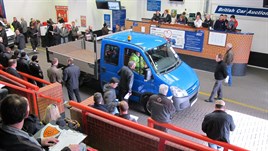 BCA is reporting a strong January for LCV sales, with rising prices across the board and record sales results.

The January average figure of £4,483 was the highest since May 2010 and continued the trend for rising values seen in the final third of last year. Performance against Guide Prices improved by one and a half points to just over 100%.

Most of the activity is focussed on low cost replacement vehicles, particularly larger panel vans that comply with the new rules that came into force on January 3, 2012.

Duncan Ward BCA’s general manager, commercial vehicles, said: “As in previous years, January has been a very strong month for commercial vehicle sales, with high levels of demand and strong prices across the board.

“BCA saw LCV sales volume records tumble at a number of locations around the network in the early weeks of January, but it was noticeable that demand softened towards the end of the month.”

He added: “There are signs that this year is going to be an interesting one for buyers and sellers alike. Because of lower new van sales since 2008 and the trend for larger businesses to hold on to vans for longer, we are expecting a relative shortage of units under five-years old to reach the market and it may become increasingly difficult to source good quality used LCV stock.

“Our own figures highlight this with the average age and mileage rising on LCV stock sold at BCA over the past year.”

Average values have stepped up noticeably in the past five months. Both average mileage and age were virtually static at 69,000 miles and 44 months compared to December, but compared to a year ago average mileage has increased by 4,000 and age has risen by nearly three months.

Fleet vans averaged 100.17% of CAP in January, up half a point compared to December.