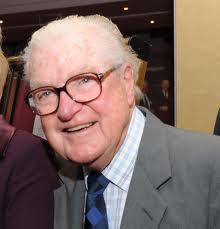 A leading name in the leasing industry and former Sunderland AFC chairman, Sir Tom Cowie has died at the age of 89.

At its height, the Cowie Group embraced 20 motor dealerships and a contract hire fleet of some 65,000 vehicles, the largest in Britain, before Cowie retired in 1993 after 45 years at the helm.

He was born on September 9 1922 in Sunderland, where his grandfather built and repaired bicycles and his father, also Tom, branched into selling motorbikes. Tom junior joined the business after leaving school at the age of 15.

However, in 1942 he closed the business and joined the RAF, serving in Coastal Command stations until he was posted to India, where he was a leading aircraftman in a maintenance unit in the Sind desert outside Karachi.

Returning to Sunderland after demobilisation, he worked as a taxi driver until he was able to reopen the motorcycle shop in 1948 and start building a prosperous hire-purchase business.

The Cowie Group went public in 1964, and expanded into the leasing and contract hire sectors which became its main strengths.

In the late 1970s Cowie became chairman and major shareholder of Sunderland AFC — but later described his tenure there as his “greatest single failure”.

The club was struggling in the lower reaches of the First Division, and was relegated in 1985.

Meanwhile, the Cowie Group developed a new strand as a bus operator with the takeover of the Grey-Green coach line in 1980, and continued to grow by acquisition throughout the decade.

But an unsuccessful bid for the Henly’s chain of dealerships in 1992 contributed to strained relationships between Sir Tom and his fellow directors — whom he accused of pursuing the bid without consulting him, while he took bets that it would fail.

He was pushed towards retirement the following year.

He became titular president, but letting go of the reins was difficult and he was critical of his successors.

The final straw came in 1997 when the company name was changed to Arriva.

Arriva gradually shed its motor-trade interests to concentrate on buses and trains, and is now owned by the German state rail operator Deutsche Bahn.