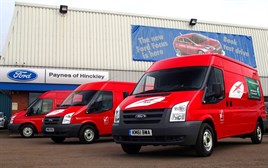 AAH, a leading distributor of pharmaceuticals and healthcare products, has taken delivery of 270 Ford models to add to its 800-strong van fleet after Ford developed a modified Transit known as the Pharmavan in association with the company.

The Pharmavan was developed to keep sensitive pharmaceuticals at the correct, ambient temperature during delivery around Britain. Ford provided AAH with a special air-conditioned load area in a long-wheelbase Ford Transit 300.

Geoff Wright, head of corporate services for AAH, said: “Most pharmaceutical products have to be kept at a steady ambient temperature.

“Using a fully refrigerated vehicle with dual compartments for this role comes at a high price, including increased fuel consumption, running costs and CO2 emissions.

“When the temperature in the Pharmavan’s load bay dips below 10 deg C, the heat kicks in independently of the driver. When it nears 25 degrees, the air-conditioning brings the temperature down. The system is only in use when required making it extremely cost-efficient and easy to operate.”

Alphonso Cain, Ford fleet business manager, said: “AAH has been a Ford customer since the Transit van arrived 46 years ago, so it’s pleasing to help the company in this way. The “Pharmavan” is the perfect bespoke solution for AAH, which will provide the company great cost savings in the coming years.”